Note: This has nothing to do with my research at school. I've submitted my research paper on airport security, and thus am not working on the issue anymore. My attempts to assert my rights and to fly without ID are those of a private citizen, and are conducted on my own time. My actions or writings do not reflect the official positions of my current, past or future employers.


I got back from spring break/Shmoocon today and found a letter from the Metropolitan Washington Airport Authority waiting for me in my mailbox.

Back in February, I was compelled to show ID by a police officer at DCA/Reagan airport. I believed I was in the right, but I didn't want to risk getting arrested, so I complied and wrote a letter afterwards. That letter can be seen here

I've scanned the letter here, but the short summary of it is as follows:

Arlington County (Virginia) has a law that requires a person to identify himself if a police officer requests it, and a reasonable man would believe that the public safety requires such identification.... This is not so different than the Nevada law in question in the Hiibel case.

Interestingly enough, the lawyer who wrote the letter states that "your name alone is insufficient for the quick background check that Sgt. Westbrook had run."

Essentially, what they claim, is that Hiibel, or their reading of the law, allows an officer to compel you to produce ID. I had clearly identified myself to the officer, both by introducing myself to her by name, and due to the fact that my boarding pass - which she had been given by TSA - had my name printed on it in big letters.

The other fishy part of the encounter was after she had run the background check (which came back clear) - at which point, the officer then handed my ID over to TSA. The letter states "The Airport Authority has no specific procedure for handling a situation in which a passenger refuses to provide identification. Your letter has prompted the airports authority to review its policies and to refine the guidance it gives its police officers".

This is a long way of not telling me much.

I'll probably end up filing a FOIA to the airport authority - to see if I can find out who said what as they decided how to reply to this letter. 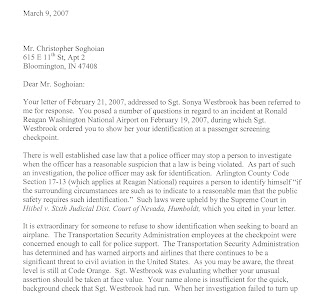 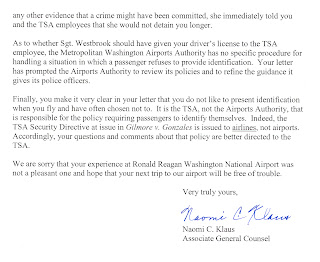 Other than clarifying Gilmore vs. Gonzales, it seems the letter sad a "whole-lot-of-nothing". Let us know how FOIA goes.

been a while since i've seen such a weaselly ass-covering attempt from a "lawyer" — an overt smoke-blowing operation.

the disguised gem in that letter is the cowardly acknowledgment that the suspicion from which their illegal actions flowed was solely your refusal to voluntarily provide papers w/o legal cause:

"It is extraordinary for someone to refuse to show identification when seeking to board an airplane. The Transportation Security Administration employees at the checkpoint were concerned enough to call for police support."

if you sue, make those two sentences your star exhibit. of course, it's followed by the FUD card. disgraceful. obviously, she cites arlington county code § 17-13 purely as blowhard diversion material, since it was inapplicable to your situation.

you were detained illegally. shocker!