Electronic communications privacy law in the United States is hopelessly out of date. As several privacy groups have noted, the statute that governs when and how law enforcement agencies can obtain individual's private files and electronic documents hasn't really been updated since it was first written in 1986.

Over the past year, privacy groups, academics and many companies have gotten together to push for reform of the Electronic Communications Privacy Act (ECPA). These stakeholders have lobbied for reform of this law, and in turn, both the House and Senate have held hearings on various issues, ranging from cloud computing to cellular location data.

Of course, complaints about the existing statute are not limited to those wishing to protect user privacy -- law enforcement agencies would very much like to expand their authority. However, as I document in this blog post, rather than going to Congress to ask for new surveillance powers, the Department of Justice, and in particular, the US Marshals Service, have simply created for themselves a new "roving" order for stored communications records.

Let that sink in for a second. Rather than wait for Congress to give it new authority, the Department of Justice has instead just given itself broad new surveillance powers.

For nearly 15 years, law enforcement agencies have had "roving wiretap" authority, meaning that they can get a court order that does not name a specific telephone line or e-mail account but allows them to wiretap any phone line, cell phone, or Internet connection that a suspect uses. In order to use this expanded authority, prosecutors have to show probable cause that they believe that the individual under investigation is avoiding intercepts at a particular place.

Although there are more than 2000 wiretap orders issued each year, as the table below reveals, federal and local law enforcement agencies rarely seek to use this roving authority. 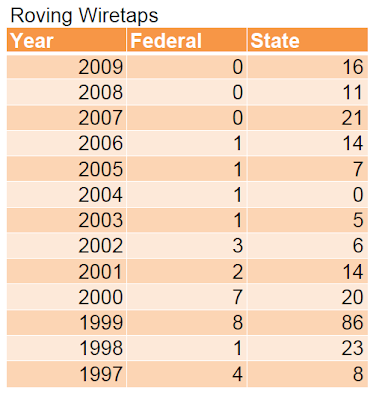 Traditionally, like wiretap orders, pen register/trap & trace orders had to name the recipient (phone company or ISP) in the order. If the government wished to go to a different ISP, they'd need to return to the judge to get another order. However, the USA PATRIOT act expanded the scope of pen register and trap & trace orders, essentially turning them into roving orders by default:

The [pen register] order . . . shall apply to any person or entity providing wire or electronic communication service in the United States whose assistance may facilitate the execution of the order.

Whenever such an order is served on any person or entity not specifically named in the order, upon request of such person or entity, the attorney for the Government or law enforcement or investigative officer that is serving the order shall provide written or electronic certification that the order applies to the person or entity being served.

Thus, post PATRIOT Act, by using a wiretap or pen register authority, law enforcement agencies can use a single court order to obtain real-time non-content data from any 3rd party that may have it, even if the service provider was not named in the original court order.

The vast majority of surveillance requests are not for real-time data, but for historical information. That is, rather than seeking to intercept emails or web browsing activities as they are transmitted, law enforcement agencies often seek information after the fact. This is both easier, and often much cheaper.

For example, existing surveillance reports reveal that 1773 wiretap orders were issued in 2005, 625 of which were for federal agencies. Similarly in 2005, a total of 6790 pen registers and 4393 trap & trace orders were obtained by law enforcement agencies within the Department of Justice (the FBI, DEA, ATF and the Marshals).

That is, Verizon's requests alone dwarf the number of publicly reported wiretaps and pen registers, by nearly 700%. This doesn't mean that the wiretap numbers are incorrect -- merely that the vast majority of requests that Verizon received were for stored records, such as historical information on the phone numbers its customers dialed, old text messages, and stored emails. It is quite reasonable to assume that other major telecommunications carriers receive a similar number of requests.

In 2005, the Electronic Frontier Foundation filed a brief in federal court, objecting to a request by the Department of Justice for an order requiring "relevant service providers… to provide subscriber information about [all] numbers obtained from the use of… pen/trap devices" upon oral or written demand by relevant law enforcement officials.

"a governmental entity may require a provider of electronic communications service…to disclose a record or other information pertaining to a subscriber or customer of such service…only when the government… obtains a court order for such disclosure under subsection (d) of this section."

As the EFF told the court:

The Stored Communications Act simply does not authorize open-ended or "roving" orders that are enforced based on the government’s oral or written representations of its pen-trap results. Indeed, such orders would leave the government in a dangerously unchecked position to obtain subscriber information for any telephone number without court oversight or approval."

I recently obtained a copy of the US Marshals Electronic Surveillance Manual, which I obtained through a Freedom of Information Act (FOIA) request. As I highlighted in a previous blog post, that handbook reveals that the US Marshals have adopted a policy of always obtaining a 2703(d) order whenever they seek a pen register.

The surveillance manual lists several advantages to obtaining such "hybrid" 2703(d)/pen register orders - such as the ability to get geo-location data from providers, who are prohibited by law from revealing "any information that may disclose the physical location of the subscriber" in response to a pen register order. It is not until a few paragraphs later, when another advantage of the hybrid order (and its limitations) is hinted at.

Thus, DOJ believes that law enforcement agencies can send a copy of a hybrid 2703(d)/pen register order to ISPs not named in the order, and force them to disclose stored subscriber records and communications non-content data, such as email headers.

DOJ's reason for doing this, at least according to the Marshals' surveillance manual, is "because we say so":

Although compelling compliance with a Pen/Trap order that also required disclosure of stored records (e.g. subscriber) is unclear under this section, investigators should assert that compliance with the entire order is mandatory irrespective of whether a provider is specifically named in the order.

Again -- even though the law does not grant the government this expanded authority, DOJ urges investigators to still assert that that companies must comply with the request.

DOJ is using this authority

Nearly a year ago, I obtained an invoice from Google to the US Marshals Service related to a pen register order from December 2007. 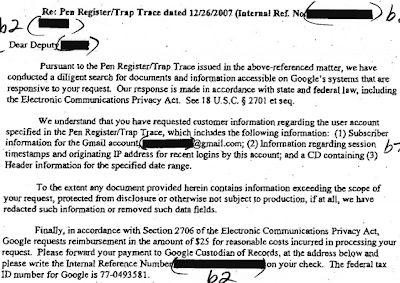 The invoice states that:

Google likely received a hybrid 2703/pen register order from the US Marshals Service, and, even though the company was not named in the original order, it provided historical, stored non-content data and subscriber information to law enforcement officials. The company could very easily have told the Marshals to get lost, and come back with a 2703(d) order signed by a judge, naming Google.

I'm not sure what is more alarming, that the US government abuses its already broad surveillance powers, or that Google, a company that pledges to "be a responsible steward of the information we hold" is not in fact insisting that law enforcement agencies follow the letter of the law.
at 3:15 PM

OIG audited USMS and found that its internal investigations unit was less than half staffed and a low prestige department.

In 2006, USDOJ had a Data Integrity Board. Stuart Frisch is / was board secretary. Last month he mailed me a report the board filed in 2006. Apparently however the board hasn't been meeting since there are no reports on the Internet of their planned or past minutes as required by the APA.

USDOJ incarcerated me without a criminal charge. I think the USMS bypassed the Automated Booking System which requires verification of a criminal charge before records are entered into the Prisoner Tracking System. USMS agreed to use the ABS in conjunction with PTS see OIG audit reports. PTS is a legacy system and allows any old activity such as voting wrong to be entered in the field for offense.

I don't have a criminal record. No motion to impeach my testimony was filed. I was imprisoned by DOJ for 5 months without an arraignment or the filing of criminal information. No bail hearing either. The U.S. attorney's offices claimed they weren't involved. USMS acted without written authority from a government prosecutor to imprison me and declared me a maximum security prisoner. DOJ said that my imprisonment was intentional. I was accused of litigating without a lawyer in a federal civil case.